Peking Opera is a form of traditional Chinese theater that originated in Beijing in the late 18th century. Compared to other types of Chinese theater, it is a relatively new style of drama, combining music, song, dance and acrobatics in a lively and colorful display.

The birth year of Peking Opera is commonly set at 1790, the year of the eightieth birthday of the Qianlong Emperor. Up until that point in the early Qing dynasty (1644-1911), the educated nobility favored Kunqu Opera, which was known for its elegant music and fine language. On the other hand, various styles of regional popular theater enjoyed by commoners were dismissed by the Chinese elite.

That changed in 1790, when four seasoned drama troupes from Anhui province entered the capital to perform for the imperial court in celebration of Qianlong’s birthday. The occasion marked the first time regional popular theater was performed in Beijing. The four troupes later came to be known as the ‘four great Anhui companies,’ and together dominated Peking Opera for the next century. 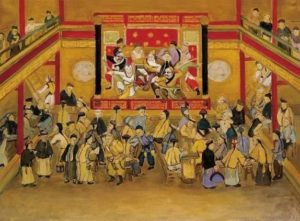 In the ancient times, Beijing Opera was performed mostly on open-air stages in markets, streets, teahouses or temple courtyards. The band had to play loudly and the performers had to develop a piercing style of singing, in order to be heard over the crowds.

The costumes were a garish collection of sharply contrasting colors because the stages were dim and lit only by oil lamps.

It is a harmonious combination of Grand Opera, Ballet and acrobatic display, consisting of dancing, dialogue, monologue, acrobatic combat and mime.

The Beijing Opera band mainly consists of orchestra band and percussion band. The former frequently accompanies peaceful scenes while the latter often follows scenes of war and fighting. The commonly used percussion instruments include castanets, drums, bells and cymbals. One person usually plays the castanets and the drum simultaneously, who serves as conductor of the whole band as well.

The orchestral instruments mainly compose of the Erhu, the Huqin, the Yueqin, the Sheng (reed pipe), the Pipa (lute) and other instruments. The band usually sits on the left side of the stage.

There are four main roles in Beijing Opera: Sheng, Dan, Jing and Chou.

“Sheng” are the leading male actors and are divided into:

“Laosheng,” – who wear beards and represent old men
“Xiaosheng,” – who represent young men
“Wusheng,” – who play military men and fighters
“Wawasheng” – who play kids
The above roles usually wear no facial paintings. “Hongsheng”, another category of “Sheng” whose face is painted red, mainly plays “Guanyu” (Chinese Ares) and “Zhao Kuangyin” (the founder of the Song Dynasty).

“Dan” is the female roles. Formerly, the term meant female impersonator. It is divided into many categories

“Chou” refers to clowns who are characterized by a white patch on the nose. Usually white patches of different shape and size mean different characters. They are not definitely rascals, while most of the time they play roles of wit, alert and humor. It is these characters who keep the audience laughing and improvise quips at the right moments to ease tension in some serious plays. 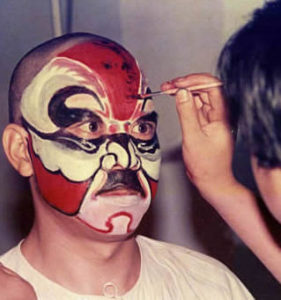 It is said that this special art derived from the Chinese opera has different origins. But no matter what its origin is, the facial painting is worth appreciating for its artistic value. The paintings are presentations of the roles of the characters.

In addition, the pattern of the facial painting reveals the role’s information too. In a word, the unique makeup in the opera allows the characters on the stage to reveal them voicelessly.